With modern techniques and software getting ripped is too easy!

Rip off!
Amusingly enough it seems in Australia the expression “rip off” is used in the same way as the Anglo-Saxon expression that starts with F. So the question “What’s the best way to get ripped?” could get a completely different answer to what you were expecting (while in the UK the expression would mean not getting what you paid for).

However in all English-speaking countries the term “get ripped” seems to be universally translated as a bodybuilding term. Even then it still creates confusion, with at least 3 different meanings:

Biggly Body
Where the Biggly Body Plan is concerned there’s only
one form of getting ripped that really counts – getting a
body that’s shapely, sexy and desirable!I often think back to a photo in a bodybuilding magazine,
many years ago, of this guy, well two photos, before and
after. In the first photo he looked like a pleasant enough
chap, bit tubby perhaps but an all-round fun guy you could
crack a few beers and jokes with. Women would find him
attractive as he was pretty large but not so obese as to be
fugly or anything. Generally women like big men and he
looked fine, though needed to lose a few pounds, say about
10 to 15lbs. However in his After photo, with the catchy
headline “From 19 stone weakling to 10 stone strongman!”
he looked hideous

Frankly he looked like a dehydrated corpse, his grin fixed,
almost manic, and the fake tan was orange. Ribs were visible
and despite the bulging muscles in some places in others the
words “could do with a good meal” came to mind.

Use with care
The powerful and effective techniques of bodybuilders to strip away body fat are what the Biggly site is all about. How to get ripped is just not something you’ll find in Woman’s Weekly yet such magazines and the mainstream media constantly assure us they have just the weight-loss tips we need. Frankly, compared to the real results of bodybuilders, they’re talking out the back of their headThere’s no diet to get ripped, certainly no pill but a combination of techniques and workouts blows away all other such efforts combined.

As such you can actually suffer from quite the opposite of most dieters, exercisers and general weight-loss searchers. Quite aside from the fact you can get ripped, literally (how to get ripped muscle tissue is something many gym rats are all too expert on), you can also lose too much body fat.

Too much?
The best way to get ripped is as fast as possible, for sure, but you need to allow for certain factors:

The human body doesn’t function properly if your fat levels are too low.

Ask around
Point number 3 is important. Many people, upon suddenly discovering real success, get carried away to the point it is no longer attractive and actually quite freakyEvery now and then actually ask other people for a reality check. Sounds a bit silly but a simple “Do I look freaky?” can save you going from a ripped body that’s desirable to “self-obsessed jerk that probably takes drugs”.

An easier technique for the more bashful is leap into the middle of any group photographs. Sometimes seeing a photo of yourself next to your more mortal humans can drive the point home far better than any gentle digs, suggestive comments or even blunt and frank advice. For example if you’re the only woman in the shot with a sun-tan in mid-December or the only guy who’s face looks like a grinning skull, perhaps you should ease back a bit?

The other problem
Of course if you’re still in the realms of wanting to get ripped let alone worrying about taking it too far the above won’t be too helpful!

To head off in that direction you need to develop a plan, one that is easy enough to stick to, with careful monitoring of both your adherence to it and your progress. If you’re already on the Biggly Body Plan and having problems contact me and I’ll help you identify what’s holding you back. For most people though, if you’re using ALL of the techniques to “get ripped” – first of all, congratulations! Secondly, as they said in that old cop show:

“Let’s be careful out there!” 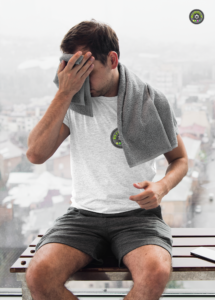